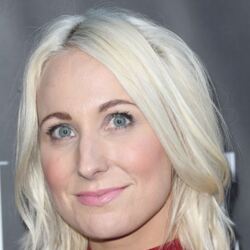 Christopher William D’Elia was born in Montclair, New Jersey, on March 29, 1980. He grew up with his mother, Ellie, who was an interior decorator, his father, Bill, who was a director and TV producer, and his younger brother, Matt, who became an actor, director, writer, and producer. Bill has worked on a lot of TV shows over the years. He was an executive producer on “Chicago Hope,” “Boston Legal,” “Ally McBeal,” and “How to Get Away with Murder,” among others. When Chris was 12, his family moved to Los Angeles, California. He went to La Caada High School and graduated in 1998. Because of his father, D’Elia got to be a guest star on two episodes of “Chicago Hope” when he was a teen. He went to New York University after high school to study acting, but he quit after his first year.

Chris was in “Celeste and Jesse Forever” with Rashida Jones and Andy Samberg in 2012. From 2012 to 2015, he co-hosted the “Ten Minute Podcast” with Will Sasso and Bryan Callen, who were both in “MADtv.” In 2014, D’Elia got a recurring role on “Jennifer Falls” on TV Land. From 2014 to 2016, he played the lead role of Danny Burton on NBC’s “Undateable.” In 2015, he was in the movie “Flock of Dudes” and in “The Comedy Central Roast of Justin Bieber.” In 2016, he had guest roles on “Rush Hour” and “Typical Rick” and competed on “Lip Sync Battle” against “Undateable” co-star Brent Morin. Chris had a recurring role on the ABC show “The Good Doctor” from 2017 to 2019. He also played a stand-up comic and sexual predator who targets teenage girls in three episodes of the Netflix show “You.” After D’Elia was accused of sexual harassment by several women, people started to see the role as a reflection of his real life. Chris has also been in the movies “XOXO,” “Half Magic,” and “Life in a Year,” as well as the TV shows “The Great Indoors,” “Alone Together,” and “Huge in France” (2019).

Chris married actress Emily Montague on July 29, 2006, and they got a divorce in 2010. In June 2020, a Twitter user with the handle @girlpowertbh posted screenshots of messages she got from D’Elia when she was 16 years old. This led more women to come forward and say that Chris had sexually harassed them and asked for naked photos when they were underage. He denied the accusations, but Comedy Central took action. They removed an episode of “Workaholics” in which he played a child molester from their website and various streaming platforms. They also removed his comedy special “White Male. Black Comic.” from the website. The Creative Artists Agency dropped D’Elia, and Tig Notaro took his place in the Netflix movie “Army of the Dead.”

In September 2020, it was said that when actress Megan Drust agreed to drive Chris home from a West Hollywood restaurant in 2011, he unzipped his pants and asked Drust to touch him after getting in the car. When she said no, he allegedly started to please himself. Megan got out of the car and told D’Elia, “You’re trashing my car.” In February 2021, he talked about the accusations in a YouTube video. He said that none of his relationships had been sexually inappropriate, but that “sex controlled [his] life.” In March 2021, a woman who didn’t give her name sued Chris in federal court, saying that when she was 17, he sexually abused her. In the lawsuit, it says that D’Elia “created a manipulative, controlling, and abusive relationship” with Ms. Doe by asking her to send him sexually explicit pictures of herself over the internet, telling her what specific sexual poses and acts she should do for him, and mentally hurting her when she said no.

In 2017, he bought a home in the hills of Beverly Hills for $5.4 million. Actress Tricia Helfer was the one who sold it.

In 2013, he bought a house in the Beachwood Canyon neighborhood of Los Angeles for $1.75 million. Craig Ferguson, a TV host and comedian, sold the item. In 2016, Chris got $1.9 million for this house.