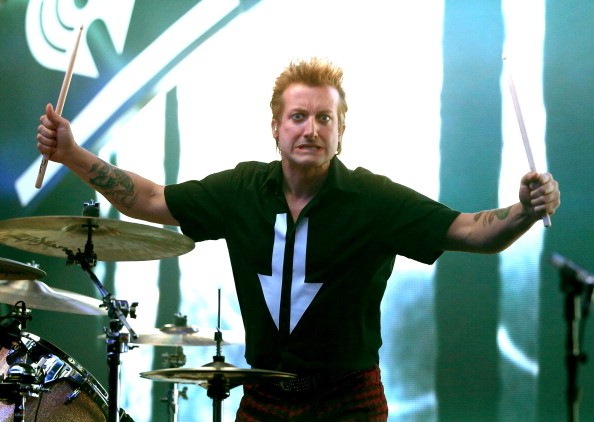 What is the net worth of Tré Cool?

The net worth of American rock musician and producer Tre Cool is $55 million. Tré Cool is widely recognized as the drummer for Green Day. In 1990, he replaced the band’s previous drummer, John Kiffmeyer. Cool has also played with Samiam, Foxboro Hot Tubs, Bubu and the Brood, and the Lookouts, in addition to Green Day.

For numerous years, Greenday was a prominent club band in the San Francisco Bay Area. In 1992, they published their debut album, “Kerplunk!” “Dookie” sent the band into the stratosphere in 1994. The album “Dookie” went on to sell over 10 million copies in the United States alone and over 20 million copies worldwide. Green Day would go on to create several hit albums and become one of the world’s most popular musical groups. Green Day has sold over 75 million records globally to date.

Tré Cool, whose true name is Frank Edwin Wright III, was born in Frankfurt, West Germany on December 9, 1972. He was reared with his elder sister Lori in Willits, California, by his father, the former helicopter pilot Frank Jr. The family resided next door to Larry Livermore, the lead singer of the punk band the Lookouts; at age 12, Wright was recruited to be the band’s drummer. During this period, he chose the stage name Tré Cool, which means “very cool.”

Green Day recruited Cool as its new drummer in 1990, replacing John Kiffmeyer; the other band members were Billie Joe Armstrong and Mike Dirnt. After dropping out of high school, Cool received his GED and briefly attended community college. His father, who was very supportive, refurbished a bookmobile for the band to use as transportation.

Cool’s debut album with Green Day was 1991’s “Kerplunk,” the band’s second release. Green Day’s breakthrough came three years later with “Dookie,” which spawned the smash songs “Basket Case,” “Longview,” and “When I Come Around” and includes a secret tune by Cool titled “All by Myself.” “Dookie” subsequently won the Grammy Award for Best Alternative Record and became Green Day’s best-selling album. Following this, the band released the albums “Insomniac,” “Nimrod,” and “Warning.” “American Idiot,” a rock opera album released by Green Day in 2004, achieved number one on the Billboard 200 and won the Grammy Award for Best Rock Album. In 2009, the band achieved more popularity with “21st Century Breakdown.” This was followed by a trio of CDs with the titles “Uno!, Dos!, and Tré! Green Day’s subsequent albums include “Revolution Radio,” which debuted at number one on the Billboard 200, and “Father of All Motherfuckers,” the group’s last album on Reprise Records.

Cool has performed with other other groups than Green Day. He participated in the Network and Foxboro Hot Tubs, both of which included his Green Day bandmates. Additionally, he participated on the Lookouts’ albums “One Planet One People” and “Spy Rock Road” from the late 1980s. Cool provided percussion, vocals, and lead vocals to both, as well as “The Mushroom is Exploding,” “That Girl’s from Space,” and “Sonny Boy.”

As a drummer, Cool developed a complex, reggae-influenced technique. He began developing a sparser, more rhythmic technique with fewer drum fills after joining Green Day and performing with bassist Mike Dirnt. Cool has been compared to Led Zeppelin drummer John Bonham and Who drummer Keith Moon for his aggressive, animalistic performance appearance.

Numerous legendary drummers have been regarded as inspirations on Cool’s playing style. In 2015, when he and Green Day were inducted into the Rock & Roll Hall of Fame, he cited Ringo Starr of the Beatles, Mitch Mitchell of the Jimi Hendrix Experience, Charlie Watts of the Rolling Stones, Alex Van Halen of Van Halen, John Bonham, and Keith Moon as influences. Cool included Dave Mello, Aaron Elliot, Al Schvitz, John Wright, and Buddy Rich as his favorite drummers of all time.

As a singer and composer for Green Day, Cool contributed to the 1991 album “Kerplunk” track “Dominated Love Slave.” Later, he composed and performed “Rock and Roll Girlfriend” as a subtrack in the “Homecoming” medley on “American Idiot.” Among his other Green Day vocal and songwriting credits is the single “DUI,” which was originally recorded for the album “Nimrod” but eventually left off. It is available online on unmastered promotional copies of the album.

Cool has recorded live versions of “Billie Joe’s Mom” and “Food Around the Corner,” the latter of which is a copy of a song from the Warner Bros. cartoon “An Itch in Time” from 1943. Additionally, he made a rendition of the popular song “Chocolate Rain” by Tay Zonday.

In 1998, Cool earned the Moon Man Trophy at the MTV Music Awards with Green Day. After this achievement, he became the first person to scale the Universal Globe at Universal Studios.

Among his numerous accolades, DRUM! Magazine awarded Cool the Best Punk Drummer in 2011. Later, his introduction to “Basket Case” was named number six on the Nitpick Six: The Six Best Drum Fills. In 2014, Cool was ranked second among the top five punk drummers of all time by LA Weekly.

Cool married Lisea Lyons in 1995; they had a daughter called Ramona and divorced the following year. Later, in 2000, Cool wed Claudia Suarez; they had a son named Frankito. In 2003, the couple ultimately divorced. In 2014, more than a decade later, Cool wed his longtime girlfriend Sara Rose Lipert; they had a kid named Mickey.